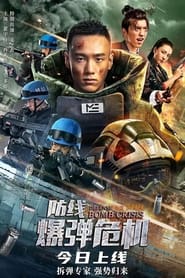 The peace talks were just around the corner, but the peacekeeping police discovered that terrorists wanted to bury bombs to destroy the peace talks, so Chinese peacekeeping police Pu Fan entered the joint bomb disposal team to safeguard the peace talks. The joint team initially suspected Lampa, a well-known local bomb expert, as the murderer. However, Pu Fan received an anonymous letter from Lampa that contained the location where the bombs were planted. Turns out, behind this incident, there are two strong evil hidden forces...